Think your job won't be automated?

Jobs, careers and entire professions are under threat. Who knows the speed change will take place? The technologies that will disrupt our lives in 5-10 years’ time almost certainly haven’t been invented yet.

There are those who are cynical about these views. They say it’s all hype and things will move a lot slower. However, I would like to tell you the story of the runaway train – to show how entire industries are being disrupted as evidence for our case.

I first became aware of the extraordinary story of the runaway train reading the newspaper in Terminal 2 at Heathrow. The story happened in Australia and had gone global. When we reached our destination, the local South Australian press was full of it.

The event happened in Western Australia. Each day trains travel to the mines around Perth. The trains are loaded and then, after completing all of their stops, make their way to the port where the commodities are exported to Asia.

One day last November, the driver of a train, operated by BHP, made a stop to inspect one of the cars. He left his cab unattended. The train, comprising 268 wagons of iron ore, started to move and ran an incredible 57 miles with no-one on board.

The train was eventually derailed in a dramatic ‘human engineered’ crash scene. By that time, it had averaged 68 mph on its 50-minute journey.

The Australian Transport Safety Bureau carried out a major investigation into how this could have led to the destruction that followed. BHP suspended all iron ore rail operations in Western Australia. It’s estimated that the runaway train will cost BHP $838m in lost productivity for the first half of 2019.

The episode turned the focus on another major operator in the area, Rio Tinto. 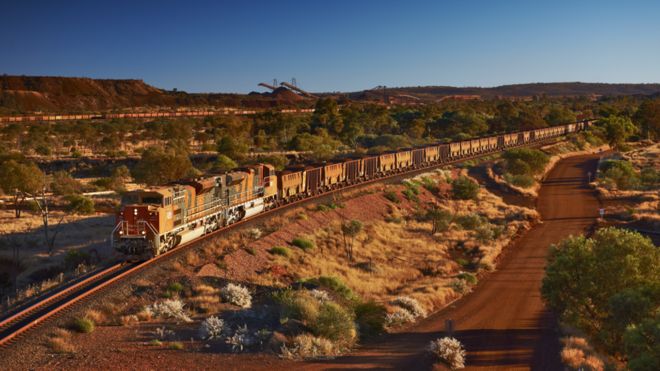 However, instead of being defensive, Rio argued firmly that the case of the runaway train adds credit to its own strategy. Rio are leaders in replacing human driven trains and vehicles with driverless ones at its mining operations. In its Western Australian mines, three-quarters of Rio’s trains run without drivers. Rio expect to have no human driven trains by mid-2019.

Rio are convinced that driverless trains and trucks are safer. The reason is that remotely located operations centres (sometimes in cities far away) can step in and take over vehicle control. Accidents are predicted to reduce by 75% as the roll out is completed. With one press of a button, the runaway train would have been stopped.

Mining is a leading case study in how machines and robots will eventually impact all industries.

Hit by the commodity downturn, companies could only go so far in ‘sweating assets’ and driving down costs.  With companies looking to implement different strategies, the rollout of driverless vehicles, robots and autonomous systems has increased rapidly. A recent report by McKinsey says this will continue and accelerate.

As well as being safer, autonomous vehicles use less fuel and suffer less wear and tear. They also eliminate driver shift changes and resource planning.

But there’s the obvious downside.

‘More than half of the 120,000 mining jobs in Western Australia will be impacted by automation and nobody really knows if they will be doing a different job or what,’ says Paul Everingham, CEO, Chamber of Minerals and Energy, WA.

BDO also believe that half of all mining jobs could be replaced by automation by 2020 (see ‘Financial Times’ 23rd November 2018). There will be more blue-collar job losses than white collar.

So, next time you doubt an article or a piece of research saying there will be job losses due to automation, think of the lessons of the mining industry.

Also, think very carefully of the skills and experience you will need to future proof your career, so you become irreplaceable in your own industry. You might not end up as the person driving the train, but you will want to be first in line for the job in the control centre.